The restaurant sort of feels like it’s in the middle of nowhere, somewhere between The Junction and Chinatown. The place is also easy to miss because the restaurant name on the window is so tiny, so if you’re planning on going, just look out for the big striped awning that reads ‘charcuterie.’

When we walked into the restaurant, the first thing I noticed was the chalkboard displaying the menu — lots of crazy stuff going on here, except don’t expect detailed descriptions of any of the dishes.

We were greeted by the young, cool, hipsters who work in the restaurant — the servers, chefs, bartenders — they all look like people you want to be friends with. 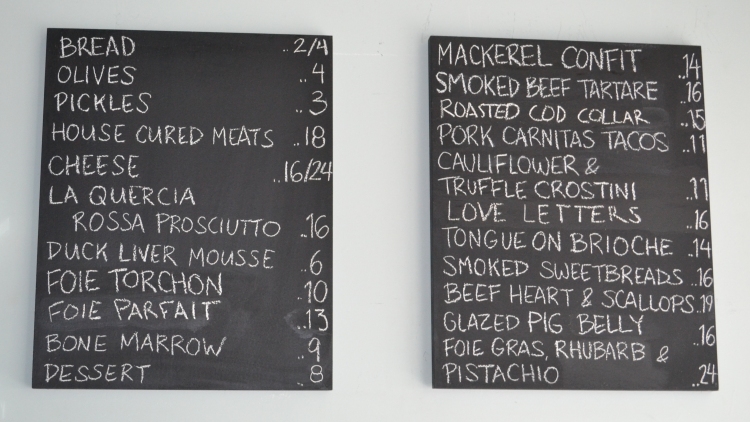 Ellie and I couldn’t decide what to order — everything sounded so good! We knew we had to try the house cured meats platter so we went with that first. We decided to order as we went along — we were in no rush, we got there just after 6pm to avoid waiting in any lines.

I was not expecting the charcuterie platter to be like this…

From the bottom up: bison and blueberry, larzo, salami and fennel, horse mortadella, and spicy summer sausage.

When our server told us what was on the platter first time around we were too excited to really listen. After we started eating we asked her again.

We were very happy.

After eating horse, there was nothing we couldn’t try on the menu.

Next up, duck liver mousse. 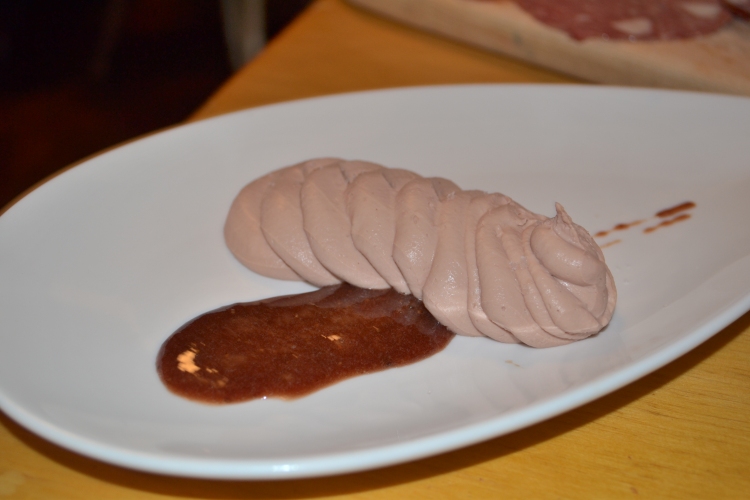 If you’re coming to the restaurant with an unadventurous eater, you can easily fool them into thinking this dish is anything other than duck liver mousse.

At this point, we couldn’t contain our excitement.

We found ourselves debating between the love letters (can’t really remember what this was – maybe ravioli stuffed with sweetbreads?) and tongue on brioche. We knew the place was somewhat known for their tongue, so we went with that.

Holy moley – we had never been happier at that point.

Again, for the unadventurous eaters — this dish could have easily passed as the most tender and incredible corned beef sandwich you’d ever tasted.

The sandwich, which we split down the middle and ate open-faced, was served with a deep purple grainy mustard, pickles, pickled celery, and tarragon mayo.

You have never had tongue like this — my tongue couldn’t have asked for anything better.

Starting to feel a bit full at this point, but no, we couldn’t stop, there was too much to try.

We asked our server which should we try next, the cauliflower and truffle crostini or the dessert. Once she told us what the dessert was – a dark chocolate torte, served with hazelnut and bacon bits, and smoked ice cream – Ellie shrieked.

We kept talking about how full we were yet we ate this crostini in probably under 30 seconds. The cauliflower puree was infused with more truffle, and the farm-fresh organic egg just oozed all over the crostini – nothing could be better.

And then the dessert…

We were slightly disappointed with the dessert. The maldon sea salt was unnecessary as it gave the dish an overwhelmingly salty and bacon flavour, when we were just dying for something sweet at that point. That smoked ice cream though couldn’t have been anything less than perfect.

Brace yourselves for a meal unlike any you’ve had before.

I know now that dreams filled with tongue and duck liver will only be reoccurring for me.

One thought on “The Black Hoof”